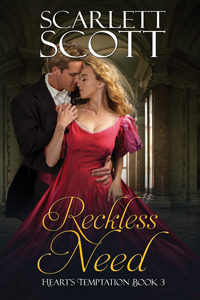 A staid duke
Heath, the Duke of Devonshire, has been living a passionless life of penance after losing the woman he loved. Determined to do his duty, he’s in search of an innocent bride with a sterling reputation. A bride who’s nothing at all like Tia, Lady Stokey.

A bold lady
The Duke of Devonshire may be handsome, but he’s as boring as a bowl of porridge. Or so Tia thinks until he carries her to her chamber and undoes half her buttons while kissing her senseless.

A decadent desire
The moment he scoops the delectable Tia into his arms, Heath wants her in his bed, and he’ll stop at nothing to have her there.When they unleash the scandal of the century, they must face consequences that are deeper and far more dangerous to their hearts than either of them imagined.Will they find love, or was the reckless need between them doomed from the start?