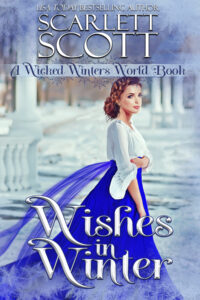 Lady Lydia Brownlow’s parents have given her an ultimatum. She must settle upon a husband or face a future life of drudgery as a companion. Dreading either fate, Lydia attends a Christmas country house party to settle upon a match. But much to her dismay, her brother’s rakish best friend is also in attendance. The Duke of Warwick is the one man she doesn’t dare trust, and the only one she can’t resist.

Alistair, the Duke of Warwick, has two problems. The debt his father left behind is about to swallow him whole, and the woman he wants to marry has been avoiding him. In an effort to prove his sincerity and win her hand, he inveigles an invitation to the same house party where she will choose a husband.

However, Lady Lydia isn’t about to succumb to his practiced seductions, and she leads him on a merry chase. When he wins her hand at last, deception tears them apart. Can Alistair prove his love and claim his duchess’s heart for good?

Publisher’s Note: Wishes in Winter was previously released in the collection A Lady’s Christmas Rake. It is part of The Wicked Winters series world and can be enjoyed in any order.