Returning to London scarred and bitter after his capture by Napoleon’s forces, Morgan, Marquess of Searle, is hell-bent on vengeance against the man responsible for his imprisonment. 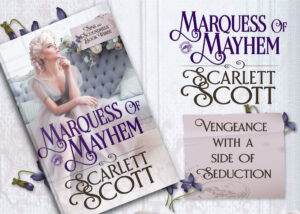 He’ll do anything to get what he wants, even if it means destroying an innocent in the process. There’s just one problem. He’s never met anyone like the woman he intends to use for his revenge.

Lady Leonora Forsythe has suffered enough awkward seasons. She longs to find a husband and make a family of her own. After the wickedly handsome Marquess of Searle ruins her, she has no intention of falling in love with the cold, distant stranger she’s forced to wed. But it doesn’t take long for her to realize there’s far more to the marquess than she ever supposed. Or to hope she may be the one to heal his inner torment.

When Leonora is in Morgan’s arms, reprisal is the last thing on his mind. With time running out and the truth looming, he must choose between the need for retribution and the fierce wife who unexpectedly owns his heart.

And don’t miss SARAH, the deliciously wicked (and Sins and Scoundrels series connected!) story coming soon in the All Hallows’ Brides collection!!! Lady Sarah Bolingbroke wants to ruin the man she holds responsible for her sister’s death. But is he actually responsible? More importantly, can she resist him? It’s got a masque ball, unrequited love, and all the Gothic scandal and steam you could possibly want…

Pre-order now for just 99 cents and devour all the amazing Gothic Regency goodness in October!