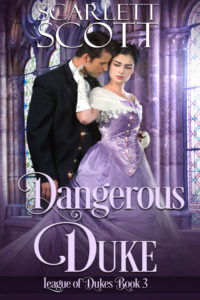 He’s lethal and ruthless.
Suspended from his work as an agent for the Crown, Griffin, Duke of Strathmore, exists under a dark cloud of suspicion for crimes he didn’t commit. He’s on a desperate race to clear his name by any means until a grave error lands him under house arrest with the last sort of distraction he needs.

She’s the sister of his nemesis.
Lady Violet West is about to be married to the most boring man in England. When the disgraced Duke of Strathmore lands in her lap—literally—she decides he is the answer to her longing for adventure. Though her brother is convinced of Strathmore’s guilt, Violet isn’t as certain.

Falling in love is out of the question.
Griffin doesn’t want her interference. Violet won’t take no for an answer. So begins a secret partnership between the fallen duke and the determined lady. Their quest to uncover the truth leads to danger and desire. But the most perilous risk of all is losing their hearts.