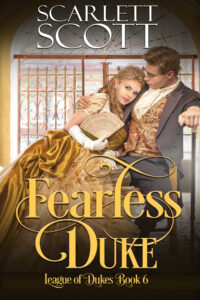 Miss Isabella Hilgrove, proprietress of the Ladies’ Typewriting School, prides herself on the quality of her staff. After the Duke of Westmorland sacks the third typist she has sent him in as many days, she’s not just outraged, she’s determined to put the arrogant bully in his place.

Benedict Manning, Duke of Westmorland, is having the worst week of his life. A bomb has exploded on London Bridge, the Special League is unraveling, and he cannot seem to find a secretary who is not a spineless watering pot. When the prim and proper Miss Hilgrove arrives on his doorstep, calling him everything but a gentleman, he can’t resist toying with her.

Their mutual attempts to teach each other a lesson quickly turn into something more. But danger is in the air, and the brooding duke and the self-avowed spinster are about to become targets of the most lethal menace London has faced…