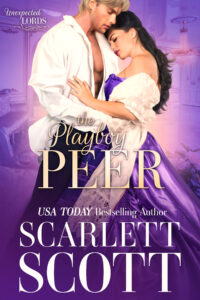 Lady Isolde Collingwood’s future was happily secured until the man she intended to marry threw her over for another woman. Heartbroken and betrayed, she has every intention of running wild across London and setting polite society on its ear. But when she becomes embroiled in a scandal with a wicked earl, there’s only one way to solve her latest dilemma if she wants to protect her sisters: marriage.

As an unnecessary third son, Zachary Barlowe thoroughly enjoyed living his life on his own terms, amassing a fortune, traveling the world, and doing whatever he bloody well pleased. Although the untimely deaths of his brothers left him the new Earl of Anglesey, he is determined to allow the line to die with him. After he unintentionally ruins the innocent Lady Isolde, however, he has no choice but to make her his wife.

A dazzling rake like Anglesey is the last man Izzy would have chosen to wed. Still, as he offers her a bargain she can’t refuse, she finds herself torn between old desires and new. And the more time Zachary spends with his unexpected wife, the more he realizes he wants her for himself. Not just for one night, but for forever.

Enemies to lovers with a hero who will do anything

A hero willing to surrender everything for the wom

Have you read Grey and Francesca yet?🔥🔥🔥